With the Covid-19 Pandemic and subsequent shutdown of the US economy, there has been no kart racing in over 3 months. Luca has not been in a kart since LAKC Round 1 back in January. I wanted him to participate in his first endurance race to prepare for the racing season reopening shortly. We decided to arrive at the Adams Motorsports Complex early Saturday for Luca to familiarize himself with the track as he has never raced there. He was also testing the new HAASE kart which Robert Perez, his team mate brought down for the team to drive.

The race started at 6;30 pm. Track conditions are perfect. It’s a very competitive field. Luca takes the first 30 minute stint. The green flag is dropped and he sprints across the track into the kart. I can’t start the KPV engine – the manual starter is playing up. The engine finally powers up and he crosses the start line in 8th place. He’s off like a whippet. By the end of the first lap he’s made up the lost time and he’s in 4th. By lap 2, he’s in the lead lapping 1.5 seconds faster that his quickest rival in the low 46 seconds. By the end of his stint, the team is leading by 45 seconds.

A smooth-ish driver change in the hot pit means that we come out in 3rd. Luca comes off complaining of pain to his ribs as the track is right turn dominant. He had done close to 100 laps in practice earlier that day; he would easily do another 100 during the race. With the intensity of the racing, I am concerned that this will be problematic later on in the race.

Robert gets into his rhythm quickly. However, the lead is slowly eroded away as he is 2.5 seconds a lap off Luca’s pace. He starts to slip down the order back to 3rd. The tires are shot and Robert gives the signal that he is coming into the cold pit to rotate tires, refuel and send Luca out.

The track is hard on the left front tire and there was simply no grip left. All the teams had the same issue seeing their times drop by 3 to 5 seconds/lap. Doing a quick rotation of front tires would help – we hoped. And we could refuel in our pits without risking a 45 second penalty. We mess it up bad! Once in the hot pit, we couldn’t get the kart started. By the time we did get him back out on track, Luca is 7 laps behind the leaders and in 7th/10 KPV drivers.

Well that was unforgiving!

Luca’s turning around 47 seconds/lap without grip!  He pulls an incredible stint again, bringing us back to within 1 lap of the race leader in second – he is flying! Things are changing so quickly that we lose track of race places. 15 minutes into his 3rd stint, we see his pace drop off dramatically and he drives into the cold pit – there’s a mechanical issue.

Robert tensely asks him if it is a loss of power or drive. Luca responds with drive and Robert quickly identifies the problem as a sheared small front gear driver. It had been worn down flat as a result of the chain having moved. We get his kart into our pit and start working. Suddenly there is a red flag and all the karts come into the hot pit. What great timing for us. We are told we can’t work on the kart under a red flag. Total pandemonium. Drivers wondering what’s happening, teams unhappy, adrenaline levels high. You can imagine.

After about 10 minutes, the race director admits that the timing system has failed and asks all the drivers, on an honor system, to say where they think they were when the red flag was raised. Hands go up. We are told that we are in 3rd. The race is to restart with a parade lap to see if the timing system works after the reboot once the karts crossed the start/finish line. If so, then formation lap and green flag. We are told that we can now work on the kart.

Tire change with a new set, gas refill and gear driver repair, Luca hits the track just as the other karts leave for the parade lap. Intense. At this point, I’ve been running around like a blue-bottomed fly and I am exhausted – we are only 1/2 way through the race. The Adrenaline high and race intensity is something that I had not experienced racing in the US. What a trip! So much fun.

The parade lap confirms that the timing system works, rolling start for the green flag and the race is underway. Luca is quickly out front. Know that there are also slower LO206s racing – it is just like Le Mans. Luca is lapping through the field. His anticipation and timing are impeccable. He doesn’t lose any time overtaking the slower karts, although it looks very close at times as he dive bombs into the turns so as not to lose momentum.

Team positions are changing dramatically as karts come in for driver changes, gas and tires. Penalties are being issued generously by the marshals as teams make mistakes in the hot pit like spilling gas, speeding and other rule infractions.

Suddenly there’s a huge crash – a KPV driver has hit the wall hard at some 60mph – the red flag comes out for a second time. The karts stop at the start/finish line. They clear the track – thankfully the KPV driver is OK. He was pushed into the wall at the bottom of the straight by a slower LO206 as he was overtaking him. He hit so hard that he split the kart frame in two!

Parade lap for timing followed by the green flag, Luca is off again like a greyhound. He’s quick but something doesn’t seem right. He’s chasing the leader but 4 minutes into the restart Luca suddenly signals the pit. He’s in too much pain and coming in. We make the driver change with the understanding that Robert would drive for as long as he could before coming in for Luca to take it home.

Luca comes off in a lot of pain with his ribs and he’s exhausted! He says that on the fast right handers, he has to hold his breathe through the pain. He even admitted that he nearly passed out a couple of times it was so bad. I am concerned. I have serious doubts that he can finish the race. He takes a seat and I give him a couple of bottles of water. He needs to hydrate and relax. He closes his eyes in pain. My attention returns to Robert on track.

He is driving an amazing 45 minute stint. From 6th and 3 laps down, he takes us to 1st and holds us there. But driver changes start to count. Teams are now sending out their best drivers for the sprint to the finish. Robert is off their pace even though he is running his best times. His lead starts to erode and he signals he’s coming in with 20 minutes on the clock to go. I look at Luca and ask him if he can do it.

He says he’s got 15 minutes in him but doesn’t know what his performance will be like – he will try.

Robert comes into the hot pit – he’s exhausted after completing 56 laps. The driver change is chaotic and we lose valuable time. Luca goes out in 6th, 4 laps down. He goes out hell-for-leather chasing like a greyhound. And he’s lapping 2 seconds/lap faster. He wastes no time in overtaking 5th and 4th placed drivers.

With 10 minutes to go, the race leader unexpectedly pulls off the track with mechanical failure. Luca’s now in 3rd about 8 seconds behind 2nd place. He’s lapping around the 47 seconds mark when he finds himself behind the race leader who is 1 lap ahead.  He slipstreams him, conserving what’s left of his tires, making the race leader do the work. He catches and overtakes for 2nd place with 5 minutes to go in the race.

What follows next is astounding. For the next 5 minutes, he fights for position with the race leader, who doesn’t realize he is a lap ahead of Luca. He thinks he’s fighting to keep the lead. Luca is riding his back bumper, pushing him hard so that he makes a mistake. The race leader is responding with an aggressive defensive line.

We are wondering what he is doing. He has 2nd place secured by some 10 seconds so he could manage his effort to just bring the kart home. I know that he’s running on empty with the effort he is giving. We are at the end of the pits waving like crazy, encouraging him through his pain. He responds by digging deeper.

His front bumper is glued to the back of the race leader’s – pushing, pushing. Luca constantly shows him his front bumper to let him know that he’s there and to force a mistake. I am amazed at what he is doing because I can see the pain in his driver stance when he goes by. However, the Adrenalin from this fight is what is keeping him going.

The race is meant to stop at 10:30pm but no white flag. The minutes feel very long as I know he has nothing left in his tank. Hours seems to go by and then the white flag comes out at 10:38. From a possible 15 minutes, he’s given us close to 30 of his best. I say to myself – you can ease off now kiddo, you have 2nd; you’ve done an amazing job. Instead he drives even harder, trying to force the 1st place driver to lose his focus all the way to the last turn. Luca takes it over the finish in 2nd 0.333 behind him, one lap down.

What a drive! I am ecstatic. We rush to the cold pit to take the kart to tech. Luca has nothing left and he is in a world of pain. He can barely stand. He gave all he could to secure that result. Luca tells me that he tried everything to force the error and a crash for the win. He’s too tired to smile. He walks back to our pits and I hobble behind him. We are both exhausted. We pass tech and secure 2nd place!

What an incredible experience. Endurance racing is a completely different animal to sprint racing. The highs & lows, the unpredictability of what you can and cannot control is draining. The adrenaline of the pits and driver changes with precious time lost on silly mistakes of inefficiency and inexperience. I sincerely believe that we could have won if we had been better organized in the pits and I take a large responsibility for that. Yet, I am extremely happy with the team’s overall performance. We all worked hard for the result.

Robert was outstanding on track. His experience told when the race seemed to be unraveling. Luca gave the team a lot of energy, showed good judgement and he was fast. His bravery and commitment through the pain was also very revealing of this young man’s emerging character. Very proud of your performance Luca. Well done.

An amazing experience – so glad we did it. Next race? Soon we hope. Once the Covid-19 lock-down is lifted, we will be back at Calspeed, CA to race for the Tri-C & LAKC Championships. Can’t wait! 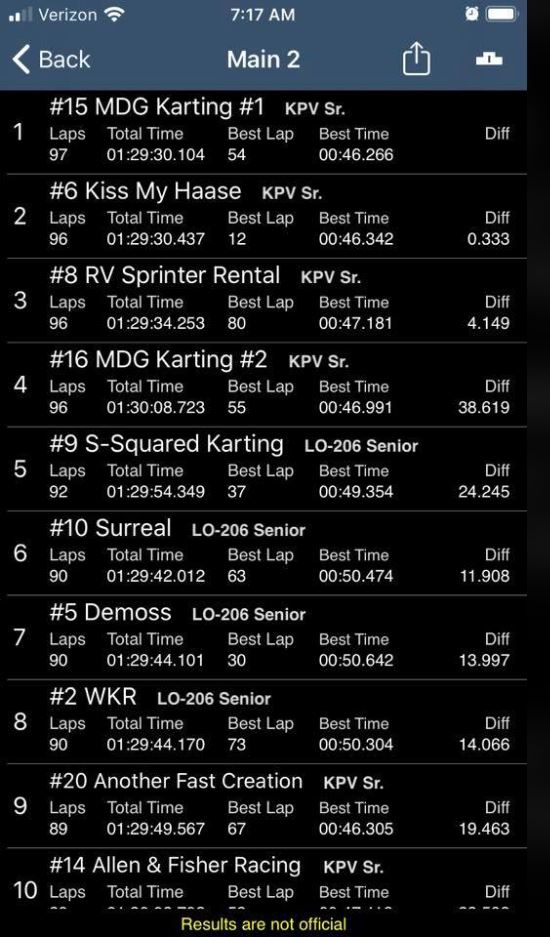