Luca’s last race of the season – he was so looking forward to getting back into the kart.  That’s all he thinks about these days – lives and dreams racing. So much so that recently, I had to put a brake on his racing exuberance – I caught him looking for the apex on one of those motorized shopping karts at the supermarket! It was actually very amusing when I caught him – the look on his face was priceless.

We still haven’t been able to sell his old kart to buy the new Mini Swift engine so he would be racing the Comer 80 again with the new chassis. He doesn’t mind, he just wants to race. He understands that seat time is the most valuable commodity so he’s happy to grab every opportunity he has to chase that apex. 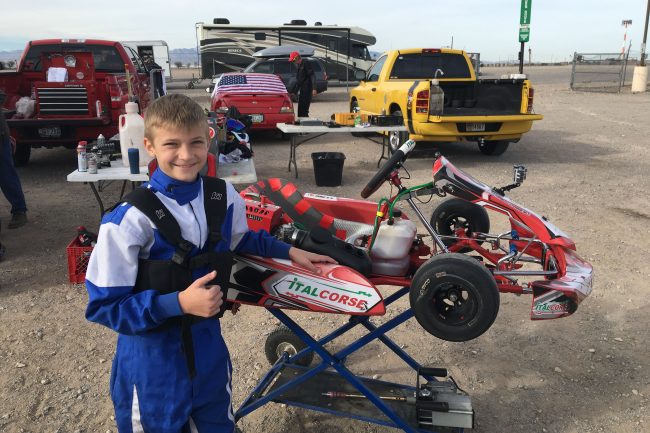 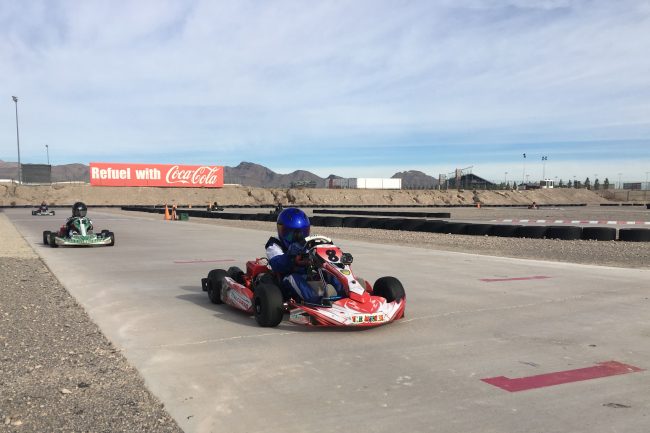 As per every race weekend, Luca starts the Saturday practice sessions cautiously, slowly at first, progressively faster, usually posting his fastest times during the races on Sunday. The concrete track is slippery so his first priority is to get a feel for the kart and the track conditions. He’s not looking to be immediately competitive, lapping mid 41 seconds. Every time, after each practice session, he has a huge smile on his face – he is still amazed with the handling on the kart. I am happy for him but I want to see him be more competitive, telling him so. His immediate rivals are driving almost a second faster and his team mates, Evan and AJ are driving sub 40 second laps. Practice goes well Saturday and by the end of the day he’s happy with the set up of the kart for Sunday. Luca’s pulling 13,500 RPMs down the straight from that little water pump – amazing job from his mechanic Paul.

I tell him that it’s time to show us what he can do and critically, not to worry about the kart. I don’t want him to have that at the back of his mind as it will hold back if he is scared of damaging the kart looking for the limit. If he breaks it, that’s my problem not his. Yes, I will be financially challenged to repair it or even replace it but I will deal with it when I need to. After all, one climbs Everest 1 step at a time! 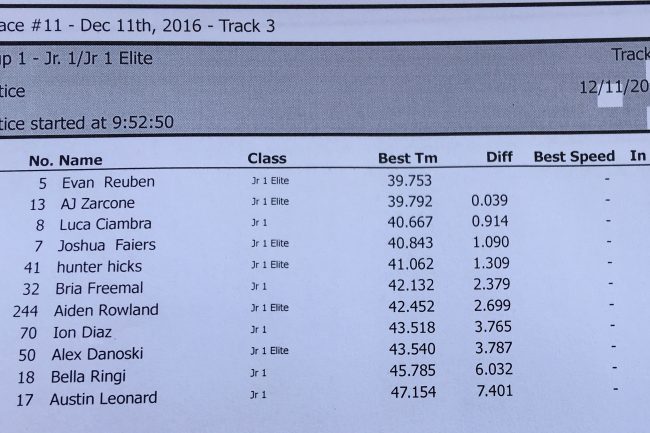 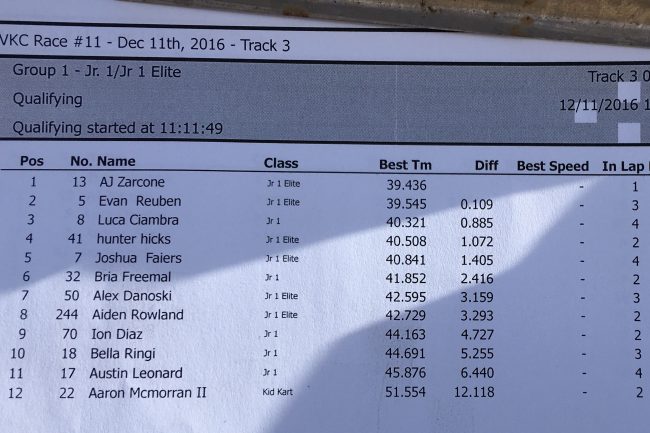 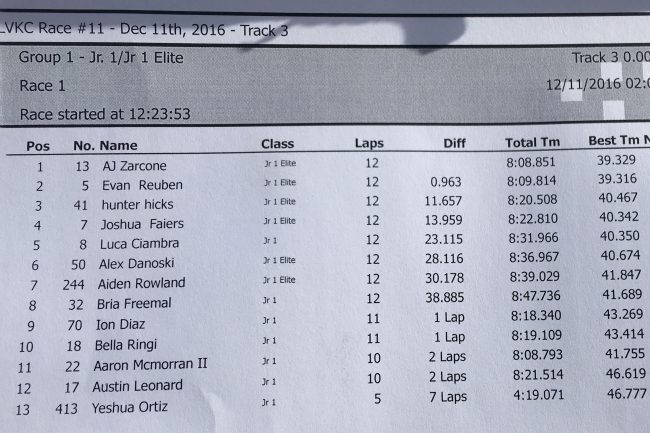 He keeps the best lap times for Sunday when it counts. During the 2 morning practices, he finds a second per lap and he qualifies 3rd on the grid less than a second behind AJ and Evan.

Race 1, he gets a good start, tucking in behind 3rd at the first turn. He’s racing against 2 very fast California drivers who are here for the weekend. However, on lap 2 he spins off at turn 7 at the top end of the track. He’s not as smooth as usual – he’s trying too hard. He rejoins at the back of the pack.

He’s quicker now, posting his fastest lap of the weekend so far at 40.350 seconds to win his class and 5th on the grid next race.

Race 2, captured in the video above, was a tremendous race. Luca has another very good start, taking the first turn in 4th, the rolling start always a test on my nerves. His team mates, Evan and AJ, pull ahead in a race of their own, with the lead changing multiple times – some great racing between these 2.

Luca is in the pack behind fighting for 3rd place. I am at the end of the straight – these kids are amazing. They do not lift; flat out into turns 1 and 2, tapping on the brakes for the tight right on turn 3 and keeping their momentum into the hairpin. Luca is patient. On lap 4 he takes a look. On lap 5 he makes his move.

It’s an overtaking move that started half a lap before he reached the straight. It’s a brave move as he hugs the inside, holding onto the racing line on turn 1, keeping the accelerator floored. The other racer is not making it easy, only yielding as they enter turn 2 side by side. He takes 3rd – I get goosebumps. Wow!

The race is far from over – his 3rd place position is constantly under threat from the drivers pushing hard behind. Racing smoothly, his times improve, posting laps in the low 40s, earning hundreds of a second on each turn. Slowly, he pulls away making a gap between himself and the chasing pack. His nearest rival is waiting for his slightest error to pounce. Luca drops his fastest time on lap 12 – sub 40 seconds at 39.93 – consolidating his position. He keeps it very tight.

Luca drives a very mature race, taking the checkered flag in 3rd place overall, first in his class, after a very competitive challenge. It was his best drive to date. 6 wins out of 7 races – that’s an impressive statistic for a rookie. Well done Luca – very proud of you. We will know at the Championship Banquet on January 8th 2017 if Luca wins the 2016 Las Vegas Rookie of the Year award. 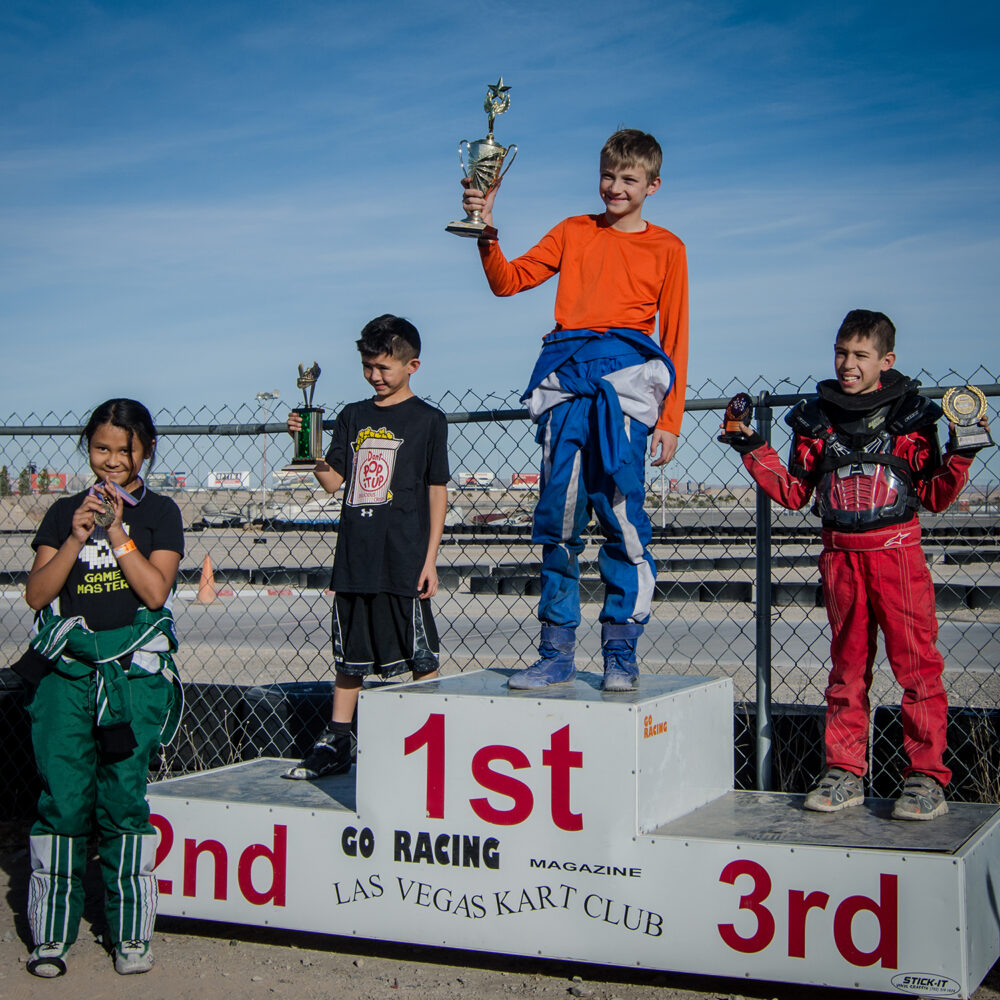 To those that helped us with their support, to our pit crew Douglas and Paul, our team mates Douglas, AJ and Evan, and to Jason for sharing his racing line, we wish you all a great Christmas, prosperity, good health and abundant happiness in 2017. It’s going to be another exciting year of possibilities.