Another great weekend of racing from Luca. He secured his first pole position and he made another very strong statement to his competitors. Luca continues to make progress in leaps and bounds, applying the lessons he learned from the bad luck of his first 2 races as he searches for his first win of the 2017 season.

The track today is Track 1 Mini Spa – one of Luca’s favorites. It’s a fast track that allows you to catapult the kart out of the Nellis Carousel for an overtaking opportunity along the Bull Ring straight into turn 3 and the mini cock screw. Overtaking is difficult so it’s important to keep the momentum exiting the turns and to recognize the late braking points to make the pass.

It is demanding on the kid racers and unforgiving due to the slippery concrete surface. It takes skill to bring the best performance out of the kart and courage beyond the normal racing line to steal time on your competitors. Being smooth is more important then simply being fast.

Saturday practice started off very slowly. Luca was unable to get into the kart until a couple of hours into the practice session due to mechanical problems. The chain had to be replaced, the gearing changed to reflect the new track. Once he was able to get out, and after the initial calibration to the slippery track, Luca started to put in some competitive times as his pit crew decided upon and then refined his race configuration for Sunday. Luca was consistent in his performances and was happy with the kart set up – a routine practice session, no surprises.

Sunday race day practice proved more challenging. The kart was not performing as expected. Luca said he was pushing the limits with the kart “feeling” fast but the lap times were about a second off the pace. Nothing had changed technically since Saturday and yet Luca was unable to better his performance. Back in the pits, Paul and Doug dived into the kart, checking on the mechanical settings, engine, frame and anything they could think of that would be the reason for the drop off in his performances.

Everything seemed to be as expected. Finally, checking the tires, Doug saw that the left rear’s tread was shot, a big gash that was worn down almost to the fabric. With less than 3 minutes to qualifying, they jumped onto replacing the tire, barely making it to the pit grid just as the first drivers were going on track. Luca was last out, letting the field get a sizeable gap for him to chase during his qualifying laps.

Immediately, you could see that he was much faster. He took his warm up lap and was up to race speed as he crossed the start/finish line. He was humming! Against his own expectations, he notched the fastest lap of the session on his 3rd lap before catching up with the back markers. He had made pole position, his first, by 700th of a second, edging out the faster, more experienced racers in this class. 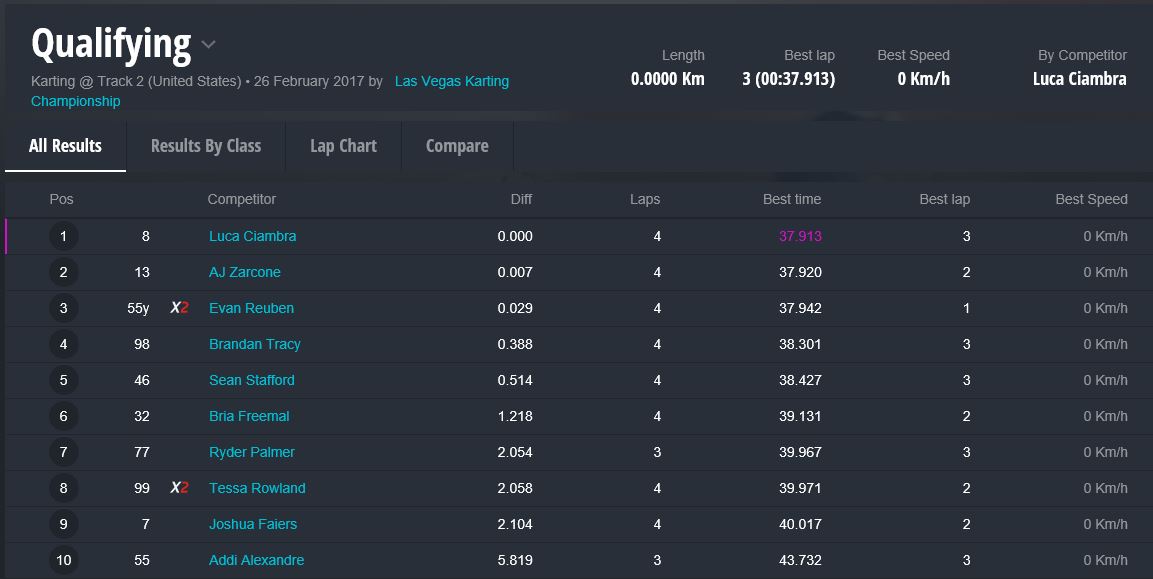 It was an excellent performance, one that really impressed his pit crew and I. 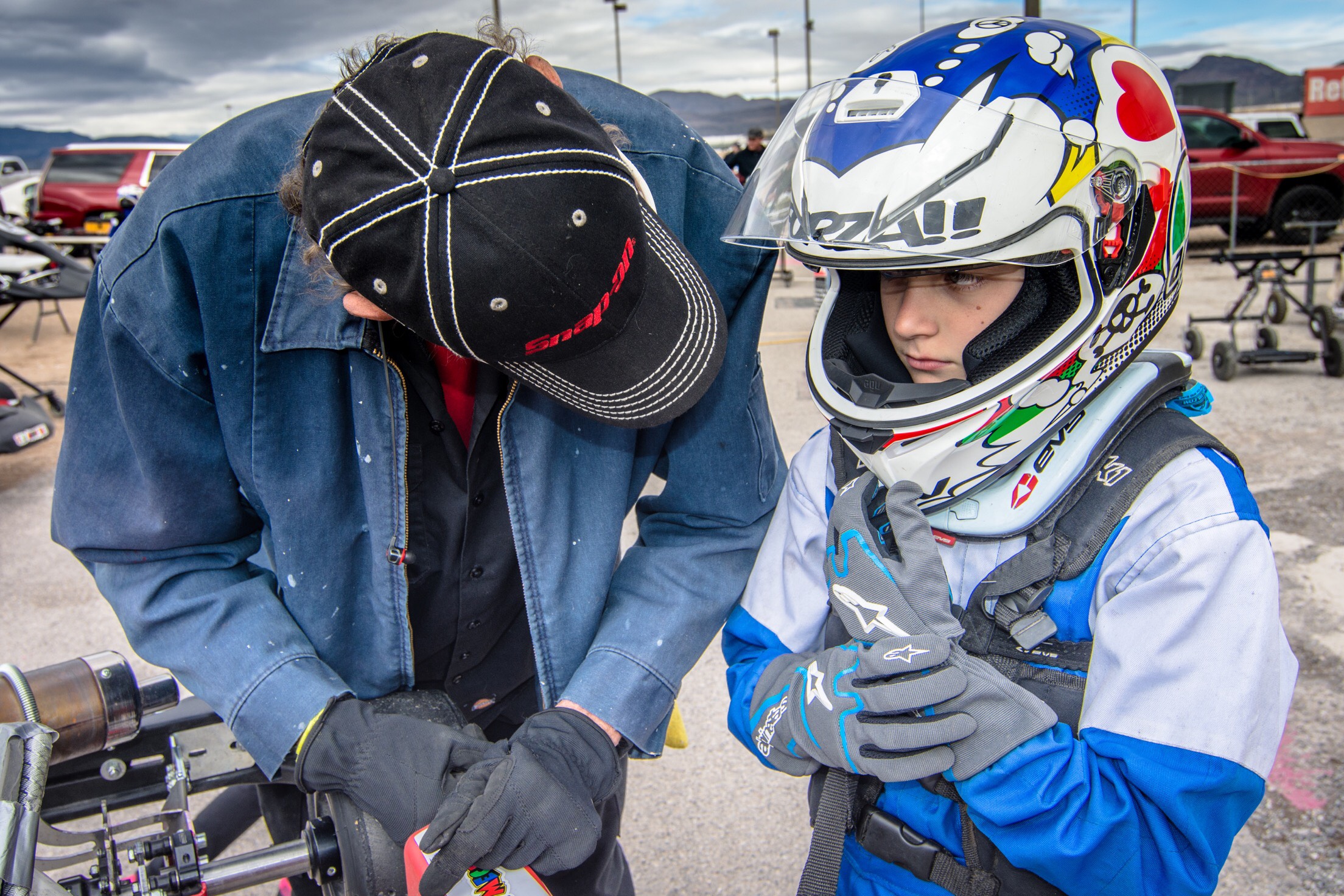 Race 1: With Luca winning pole position, the strategy for the rolling start would be a new experience for him. He was prepped on how to slow the field in the back straight before bringing the pack up to race speed crossing the starting line. 1st time around after the warm up lap, the field was too messy and they were told to go around another time. The 2nd start was a disaster for Luca. Kart #13 jumped the start and the green flag was still dropped to start the race. Luca was taken by surprise as he anticipated that it would be restarted but no such luck. I was to register an official complaint at the end of the race but as of this moment, the race was on!

Luca takes the first turn in 6th place, barely missing 2 karts spinning in front of him to exit Nellis Carousel in 4th. Very quickly, the first 2 karts began to pull away as Luca was held up by a slower racer who, to be honest, was racing his socks off! As I mentioned earlier, overtaking is difficult, taking Luca 4 laps to pass Kart #77 on the back hairpin. As he exited onto the Las Vegas Boulevard straight, he was 7 seconds behind the leaders.

Instead of giving up, Luca put on a show that I would not soon forget. He showed tremendous heart in the manner in which he hunted down the leaders. He drove superbly. He was smooth and very fast – each lap closing the gap, never once making a mistake or running wide. When he crossed the finish line on Lap 12, Luca was 1 second behind the race winner and 1/2 a second behind 2nd. He had run out of race but he had made a huge statement of intent to the Racing Club and they had seen.

I was ecstatic with his performance because it was the first time I saw Luca confirm his potential. Back in the pits, he expressed his disappointment at his terrible start, but also recognizing that he had ran an excellent 3rd place in the race. His pit crew shared my enthusiasm. Paul told me that when he saw Luca’s bad start, he walked away shaking his head at the decision not to recall the start. He returned track side after hearing on Luca’s performance, simply mumbling ‘unbelievable” as he walked by me with his kart. 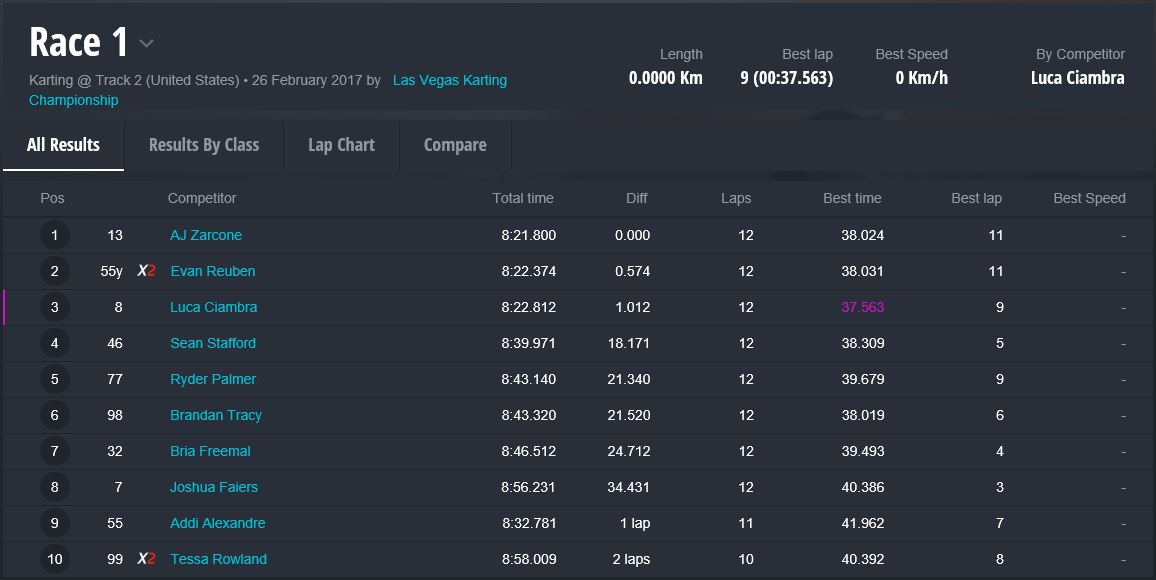 I ran some analytics of Race 1 to illustrate the power of Luca’s performance against the 2 fastest drivers in this class. Luca was badly held up for 4 laps before he was able to pass Kart #77. Once by, his performance was incredible. He ran a sub-38 second lap consistently for the remaining 8 laps of the race. He registered his fastest time on lap 9 and ran an average of 3/4 of a second faster that the race leaders.

It was a very impressive performance! I am beaming with pride …

Race 2: Luca was now 3rd on the grid and he would exact a revenge of sorts on Kart #13 on the rolling start, taking the 1st turn in second position behind Kart #55Y. This was a completely different race to the first in that there was nothing between the 3 drivers for the entire 12 lap race. Less than 1/2 a second separated them at the finish. It was a demonstration of close combat driving and patience from all 3 racers, who showed a racing maturity that had everybody on the edge of their seats. It was super entertaining to watch.

At the end, Luca was less than 2 tenths of a second behind the race winner who, while holding him up, had run a supreme race defending his position, never once making a mistake to give Luca the opportunity to attempt the pass. Returning to the pits, the adrenaline rush still coursing through their veins, they hugged and hi-fived in the knowledge that they all ran a superb race against each other – and the 2 fastest drivers with a new found respect for Luca. He had them looking over their shoulder.

Overall, this was by far his best performance to date. He was quick, smooth in the way he handled the kart, intelligent in his decisions and patient. He knows that he is faster – Race 1 showed that – but his priority was to finish race 2 for the first time. He wanted the points. He achieved his objective and did so in some style. It was impressive to watch … and very, very exciting. Now he’s ready to learn how to win.

There is a 3 week hiatus to the next race weekend and I know that Luca will be impatient to build on what he has learnt today. I anticipate going to Grange Motor Circuit in Victorville, California during this break for some additional seat time. I also want him to drive on asphalt to experience the difference in grip and consequent performance. Once again, teaching him to push harder beyond his comfort zone as he learns to master his kart.

Next race weekend is scheduled for March 19th … FORZA LUCA!